Episode 4: The Pig Chase and the Pheasant in the Brown Paper Bag

I have noticed two things over the past few months.  The first is that I have inherited the ‘might-come-in-useful-one-day’ gene.  While sorting through dad’s things, I can’t bring myself to throw away anything that looks like it might be a part of something else even though I know that the likelihood of me recognising that ‘something else’ is fairly slim. In true Plisner fashion I now have a pile of these almost-useful objects waiting for their long-lost counterpart that, for all I know, could be lying in the very same pile.   One day it will have to be dealt with…………..but not today.

The second is that my once-large garage appears to be shrinking; strangely dad’s looks more spacious than usual.

A couple of blogs ago, when I told the tale of the guns there was a suggestion that dad may have had them to try to shoot a pheasant.  This is the story of the pheasants at the end of the garden and one about the Agnes the pig; interspersed as usual with more drawers and collections.

After moving into the house near Cambridge, dad harboured ideas about using his one acre of land to become self-sufficient.  For inspiration a visit was paid to John Seymour, the 1960’s Self-Sufficiency guru on whom the TV series ‘The Good Life’ was said to be based, at his small-holding in Suffolk.  Mum recently told me that she and dad had been disappointed with the visit. While they were there, John’s wife returned from a day’s shopping in London having purchased lots of fancy cheeses.   This was not a model of self-sufficiency that mum and dad were particularly interested in subscribing to and anyway my mum always hated blue cheese.

Not to be deterred from the ideal, in the years while I was growing up, dad used the garden to house beehives, pigs, one sheep, geese, ducks, chickens and rabbits and there was always a vegetable patch full of leeks and potatoes.  Having lived off the land for several years, whilst hiding in rural France during the war, dad was quite a dab hand at killing, plucking and gutting most things and, apart from the occasions when my pet rabbits appeared as Sunday lunch, we were all quite happy to go along with it.

Agnes, our first pig appeared when dad realised that the school where he taught was disposing of large volumes of food on a daily basis.  Anyone who experienced school dinners of the 60’s and 70’s will remember why more was thrown away than was ever eaten and I am sure that a large proportion of the pigs-swill was tapioca and re-hydrated cabbage which at my school seemed to be on the menu every day. True to form dad decided that he could put this waste to good use.  He purchased a pig, two plastic dustbins and some wire fencing.  A pen was constructed in the back garden and before too long Agnes was in residence.  Each day dad would return from school, the two plastic dustbins in the back of his Austin 1300 full of the still-luke-warm food, along with that familiar school-dinner aroma.  Agnes would snort with delight as the dustbins were emptied into her trough.  That same pattern continued for several years, during which time we bred pigs and ate pork as an alternative to chicken and my rabbits were spared.  Then new regulations came in that stated all such food had to be re-processed before it was fed to animals.  At which point the pigs were recycled into the freezer.

Much of my childhood was spent rounding up said livestock from other people’s gardens in the village (neighbouring villages in the case of the sheep).  The geese were the worst offenders and it was a regular occurrence for my brother Peter or I to have to go up to the village shop, where we would find them hissing away at anyone who passed.  One unforgettable occasion was when I was about 15.  My friend (Splodge) and I were going to a party and, armed with our 30p bottle of cider and dressed in the latest fashion of long wrap-around cheesecloth skirts, we were waiting for a lift.  Just as we were about to get in the car a pig wandered by. The next half-hour was reminiscent of a Benny Hill comedy chase, minus the scantily-dressed women: Pig; followed by Peter; followed by me; (with restricted movement in my long skirt and one hand on my head protecting the curling-tongued hair, that had taken several hours to perfect); followed by dad, who was shouting directions at everyone (including the pig); followed by friend also in long skirt and with curling-tongued hair).   The chase continued around the garden several more times: pig; Peter (who was now armed with a board to try to steer the pig in the right direction); me (skirt now embellished with leaves and twigs and hair slowly un-curling); dad getting louder and louder; friend who by now was wondering how she came to be chasing a pig in her new cheesecloth skirt on a Saturday night.  Eventually the pig was cornered and steered back to her pen.   Though slightly late, we did get to the party sporting a new rustic, unkempt look with just a mild aroma of pig.  Needless to say our pulling power was severely handicapped that night. 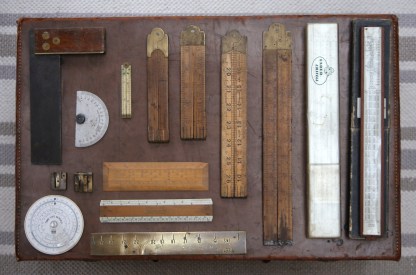 Always on the lookout for menu variety and free food dad had always had his eye on the pheasants at the end of the garden.  They never came anywhere near the house and you rarely saw them, but you could frequently hear the squawking and fluttering as they moved from ground to tree.

Dad described the pheasant in his book:

“He allows me to get within ten paces, pretending not to notice the stealthily approaching homo ineptus, after which he deposits a dropping and withdraws lethargically.  Should I start running, he would lift himself angrily over the hedge, swearing while airborne”

Over the years he tried numerous tricks to entice the pheasants closer to the house, so he could bag one for the pot.  One recommended method involved sewing raisins onto a thread, which in turn was attached to a brown paper bag.  The idea was that the pheasant would eat the line of raisins one by one until it got to the last raisin in the bag, by which time it would be inside the bag.  Being the stupid creature it was, once it could not see where to go it would stay put on the ground and could be easily caught.  Unfortunately for dad, nobody had informed the pheasant of its role in this plan and it gaily ate the thread and raisins, shook the bag from its head and disappeared with its raisin-filled gullet back to the hiding place at the end of the garden.  Dad also tried leaving out bowls of brandy in an attempt to make the pheasants too drunk to run or fly away.  The brandy was drunk, but the tolerance for alcohol clearly higher than expected as there was never any sign of an inebriated pheasant.

And, here is the strange part of the story (cue title music to ’Tales of the Unexpected’).  The morning after dad died, just outside the kitchen window, closer to the house than they had ever been seen before, were 5 or 6 pheasants strutting around.  You could almost hear them calling to all their friends “He’s gone; it’s safe to come out now”.

I add the following four pictures in response to comments made on my blog and an article on Hidden Museum (http://www.hiddenmuseum.net/ihre_post.html).  The article makes references to something that I had always thought was one of my dad’s many eccentricities.  He enjoyed playing with the postal service and as well as sending letters and postcards (mostly addressed back to him) with minimal address details, he would also try various stamp combinations.  For example, he would cut a stamp in half to represent half of its value or he would use foreign stamps in the wrong country or a combination of different country stamps on one envelope.  He would also stick something in the corner of the envelope that wasn’t a postage stamp at all.    If ever I went abroad I would be given a batch of postcards with the request to post them when I got there.  Dad would have already stuck on his assortment of stamps and added odd message.  A lot of these cards and envelopes form part of ‘the hoard’ and that has enabled me to illustrate his actions and quote a couple of the messages.  “We have left the cat in the oven with enough food and tranquillisers for five days” was closely followed by “No need to look after the cat, the tranquillisers ran out and she did not survive the trip”.  I can confirm that no real cats were ever subject to either the oven or the tranquillisers. 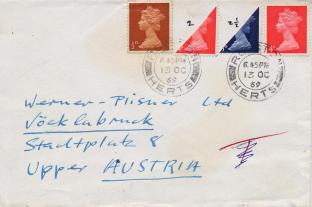 A ‘To Pay’ stamp is used here amongst the more usual postage stamps.  These stamps used to be added to the envelopes by the Post Office if the correct value of stamps was not put on the letter.  In this case the ‘To Pay’ stamp has been franked as if it were a valid postage stamp.

This is my favourite.  A letter posted and franked with a Green Shield Stamp.

For those of you too young to remember, Green Shield Stamps were not postage stamps at all, but loyalty stamps, issued by many shops and petrol stations each time a purchase was made.  They were collected and stuck into a book (I’m sure I’m not the only person of my age who remembers being responsible for all the licking and sticking that required).  They could be exchanged for items that were chosen from the Green Shield Stamp Catalogue and there were shops of the same name dotted around the country.   I don’t remember anyone who was patient enough to save up the 375 books required for a colour television, but in 1965 you could exchange just one book for ‘A set of six mugs in pastel colours’, ”Stainless steel salad servers” or ‘A set of six lager glasses with gold rims’.  All vital items for the 1960’s households!

I leave you with the good news that I have found the stash (I knew there would be one!)   A neat little bundle of damp fifty-pound notes was retrieved from under a floor board and came just in time for mum to pay the man for trimming the trees.

This entry was posted in Uncategorized and tagged Green Shield Stamps; Self-Suffiency. Bookmark the permalink.

3 Responses to Episode 4: The Pig Chase and the Pheasant in the Brown Paper Bag