Posted on November 26, 2012 by plisnerhaines

Dad’s Drawers: Episode two and the story of the gun.

Some background first and then the gun.

My dad was an Austrian Jew, born in Vienna in 1919. Hoping to keep one step ahead of Hitler he, in his own words: “Dressed in 1938 rambling outfit; Lederhosen, hobnail boots, rucksack and Mandolin I set forth from Vienna’s Westbahnhof into the unknown[i]”; he made his way over the border into Switzerland, then over the Alps into France and later over the Pyrenees into Spain.  I can’t imagine what it must have been like to ‘up stumps’, leaving your family and worldly belongings behind; but maybe that alone was the influencing factor to his hoarding habits later in life.  I know that dad found it impossible to part with anything.  As far as he was concerned everything would have a use someday (though not sure what plans he had for the Austin 1100 that is, as I write, slowly sinking in their garden 40 years after it last saw a road).  Growing up, my brother and I had bicycles made up from wheels and frames that had been ‘rescued’ from lay-bys and rubbish tips. Living as we did in the flat countryside of Cambridgeshire; there was never a need for any fancy gears.  Just after I was married, and living in a house where the previous occupants had taken all the curtain rails (and light bulbs), we passed a rubbish tip on the edge of a building site. After some rummaging, dad presented me with a very dirty curtain rail.  “Bit of a clean and it will fine” he said.  We took it back to the house, but never made it inside as Paul, my recently acquired husband said: “I am not having that junk in my house”.  This was to be a familiar pattern in our household over the next 30 years!

Dad couldn’t even throw away plastic containers and in his kitchen the storage jars were cleaned out, 2-pint plastic milk bottles stacked very neatly on top of each other (quite attractive in their own way once filled with rice, lentils and beans).  Well before the green revolution encouraged us to ‘recycle and reuse’ my dad was doing so because he could not bear the thought of any moulded plastic item going to waste.  To date I estimate to have thrown away (into recycling bin of course) several hundred of these plastic milk bottles!

Some of those plastic milk bottles in use

I already knew about the air rifle.  It had belonged to my brother and as children we had spent many an enjoyable afternoon firing air pellets at coke cans in the garden.  Some years ago dad had put the gun under his bed, along with the flash gun from his camera, in case of intruders.  I am not sure what he would have done with the gun had he ever needed to use it.  It wasn’t loaded and too far under the bed for him to reach, maybe the fact that it was there gave him a sense of security.  The flashgun, however, was closer and charged ready for use.  He told me that if anyone entered the bedroom he would fire it off, temporarily blinding the intruder while he made his escape.

Having cleared a corner in his workroom I was ready to shift some furniture (still looking for that elusive stash of money which I was sure I would find somewhere.)  I moved a shelving unit away from a wall and, lo-and-behold, no money, but a handgun!   Now, I have no knowledge of guns but it didn’t look very interesting, was going to add nothing to my growing collections or displays; nor did it look like something I would be selling on Ebay.  I threw it in a box destined for my house and the rapidly growing collection of ‘Not-sure-what-to-do-with-this-so will-deal-with-it-later’.  ‘Later’ meaning that it would sit in a box for several years until space ran out or, as in the case of one house we lived in, until the surveyor warned us our ceilings would fall in if the loft wasn’t lightened of its load. 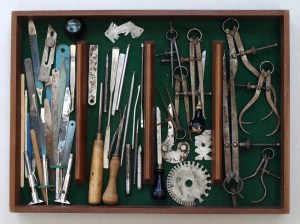 Anyway, I digress; back to the gun.  A couple of weeks later I was chatting to Julian, a neighbour, who had come over to look at the various ‘large items’ in the workshop (One lathe, several drills, three saws, two grinders, an engraving machine and some machinery as yet to be reached and identified).  We were looking at the remains of a third gun, an old rifle riddled with woodworm, when I told him about the handgun.

He said “Check on the internet, it may be worth something”.

So I did.  I found the make and model of the gun and duly tapped ‘Saxby Palmer Revolver’ into Google.

Imagine my horror when one of the first search items was headed:

(Not since I had used Google to search the sentence “What can you do with a dead deer” have I been so shocked, but that’s another story altogether).

Further reading of the article told me that: a) The gun was illegal and b) It definitely would not be advisable to try and sell it on Ebay.

What to do next?  Clearly I couldn’t leave it where it was.  Some suggestions on the internet were to saw it to bits with a hacksaw or bury it in the garden; neither of those options was particularly appealing.

But, as paranoia faded an over-active imagination stepped into its place.  What if this gun had been used in a crime and my dad had hidden it for somebody?  Would they have to search the house (that my mum still lived in)?  It wasn’t such an outlandish thought.  For most of his working life in England, dad had been a metalwork teacher and, as a teacher of a non-academic subject he attracted the ‘drop-outs’. They would, instead of going to Maths or English hang around the metalwork room pretending they had a free lesson.  Dad never asked any questions, giving them jobs to do to keep their idle hands busy.  After leaving school these same boys (it was always boys as us girls were not allowed to do metalwork in those unenlightened days and I am still very bitter about that!) would regularly drop by the house for a chat with dad.  He always had time for them and vouched for them when he could.  Education had chewed these boys up and spat them out with no qualifications or skills, and several of them ended up in borstal or prison.  It crossed my mind that if one of these boys had turned up at the house with gun in hand asking dad to hide it, he probably would have agreed.

I now wanted to be rid of the gun as soon as possible so telephoned the BASC (British Association for Shooting and Conservation).  Julian had told me that they would be able to advise me.

They confirmed that: yes, the gun was illegal; no, I couldn’t sell it; but yes they would be able to dispose of it for me and better still they would arrange for it to be collected.

So this is how I came to be visited by a very friendly Firearms Officer from Essex Constabulary who, much to the relief of us all, took the gun away saying “Happens all the time, if you find any more just give me a ring”. It turned out that the gun was an air pistol that until recent years was quite legal until they discovered that the cartridges could be adapted for more lethal purposes.  I still don’t know when and why dad came to have the gun and why it was hidden; maybe, as my friend Heidi suggested, it was for the pheasants (that’s another story), but we will never know.

Next week off to Christies of London with the fat nude….